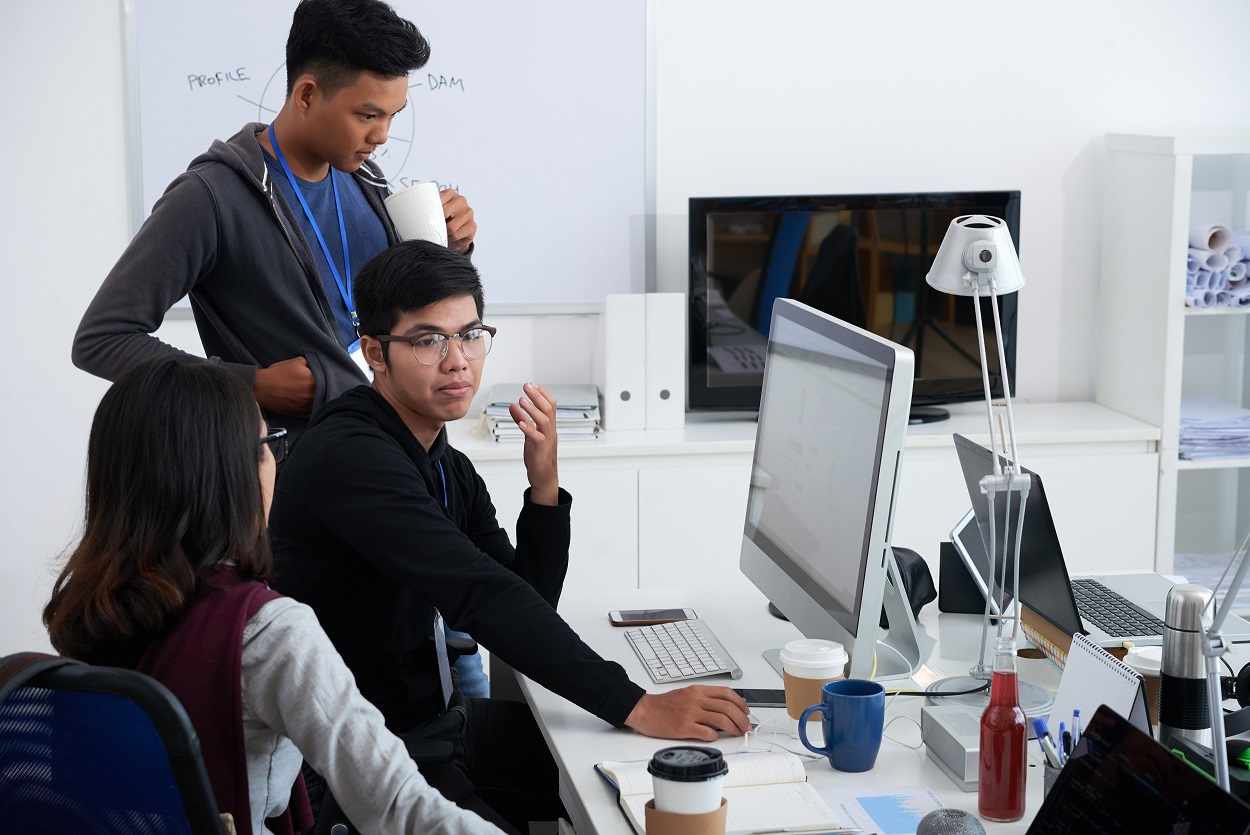 If you're looking to find a Web3 developer, it can be difficult to know where to start. You might not even know what Web3 is! But don't worry, we're here to help. More and more companies are eager to hire Web3 developers jobs to work on this brand-new, developing technology as the Web3 ecology evolves.

First, you'll need to understand what Web3 is. Web3 is a term used for the third generation of the World Wide Web, and it refers to the use of decentralized applications and smart contracts. In a remote development environment, testing and deploying smart contracts can be difficult.

The ability to concentrate on the app rather than the underlying infrastructure makes it the perfect platform for creating decentralized applications. In other words, Web3 allows for secure and transparent communication between users and applications. This makes it a perfect choice for businesses that want to build trust with their customers.

So now that you understand Web3, how do you go about finding a Web3 developer? Well, there are a few things you can do within a few weeks. First, you can search online for Web3 developer jobs. This will give you a list of companies that are looking for Web3 developers. You can then research these companies and see which ones best fit your needs.

Another option is to use an online directory of Web3 developers. These directories will provide you with a list of qualified developers who can help you build your Web3 application. You can also request recommendations from friends or coworkers. They might be able to suggest a Web3 developer who would be a suitable fit for your project if they've already worked with one.

By following these tips, you should be able to quickly and easily find the best Web3 developers for your needs.

Who Are the Web3 Developers?

Web3 developers are responsible for developing and managing web-based applications that use the Web3 protocol. They work with Web3 clients, Web3 servers, and Web3 programming languages to create dynamic websites and web-based applications and run decentralized autonomous organizations. The best blockchain developers are those who have a strong understanding of the Web3 protocol and its associated technologies. They should also be skilled in web development, web design, and web administration.

There are many ways to find Web3 developers. You can search the internet, attend Web3 conferences, or look for Web3 job postings. The internet is a great place to start your search for Web3 developers. There are many web development forums and web-based communities that can help you find Web3 developers. In addition to offering a development framework to make sure that apps function as planned before being released on the main net, Web3 platforms frequently come with capabilities that make it simple to access blockchain data.

Web3 conferences are another great way to find Web3 developers. These conferences bring together Web3 developers from all over the world and provide an opportunity to learn about new Web3 technologies and meet potential employers. You can also look for Web3 job postings. These postings are usually found on web development job boards and web-based classifieds.

What to look for in a Web3 developer

No matter how you go about finding a Web3 developer, make sure to interview several candidates before making your final decision. This will ensure that you find someone who is the right fit for your needs and your project.

How to assess their skills and experience

Finding a specialist with the necessary skills to take on the particular project in question is a unique difficulty for businesses of all sizes, from start-ups to huge corporations, who need to hire Web3 developers. The appropriate software is always accessible thanks to Web3 platforms, one of the most potent blockchain developer platforms in the world, and the platform used by the majority of the top blockchain apps on the planet due to its user-friendly interface. The abilities they require to carry out their duties at work will be discussed in this section.

The key features and most crucial competencies needed by Web3 developers are:

Activities and Duties carried out by Web3 developers

This engineer creates the user interface (UI), which comprises the application's appearance and feel. They ought to be able to deal with JavaScript, CSS, and HTML.

The servers that house the dApp's UI are built by these backend developers. They ought to be competent with NodeJS or other virtual machine development tools (Python, Ruby, etc.).

A full-stack developer is an engineer who possesses both frontend and backend development expertise. On both the front end and the back end of the stack, they can take a concept from conception to manufacturing.

These professionals design mobile applications that use the Web3 framework and give users access to information on bitcoin. They make sure that their applications function properly on a variety of platforms and operating systems, such as iOS and Android smartphones.

They examine massive databases to find patterns in the performance and behavior of Web3 users by encrypting the private key provided by developers. They also predicted how these patterns would affect Web3 in the future.

Engineers in machine learning create algorithms that aid in forecasting based on trends they've discovered using analytics software. On the Web3 platform, these predictions are used to enhance performance and user experience.

DevOps engineers are in charge of upkeep for the entire Web3 system's infrastructure. They check that each part of the system is operating as it should.

Where Should You Look to Find Web3 Developer Jobs?

Finding a web developer who can work with you to design your company's website or app is crucial in a world in which everything is moving online. The Web3 developer is in charge of making sure the website or app has the most recent security features and stays up to date with the latest and most recent upgrades.

An exponential rate of growth is being seen in the blockchain ecosystem. Every day, more programmers are hired to work on creating blockchain technology. Some of the methods for finding Web3 developers are as follows:

It is more typical to locate Web3 designers through freelance websites. Web3 developers can often be found on prominent websites such as Upwork, Fiverr, and Freelancer. However, one should use caution when hiring freelancers because some of them may be cons.

Making sure a developer has the skill set needed for your work and is competent enough to fulfill it on schedule is the most crucial step before employing them.

The leading employment channel on the Internet is called LinkedIn. It is used by business people to network and looks for possibilities. Finding the ideal Web3 Developer on LinkedIn can be difficult because there are so many available. Some of the most important aspects to take into account while recruiting a Web3 developer via LinkedIn are as follows:

What degree of experience do they have? How long have they been researching and developing in this area? Have they already worked on projects akin to yours? What is their present standing? Are they independent contractors or a worker for an established business? You may use LinkedIn to locate the top Web3 developers by asking these questions.

Web3jobguy is a job board that connects companies with developers. We handpick the best employment in the sector that is expanding the quickest. Looking for executive, community, and developer badasses. The organization may concentrate on its core operations without having to bother about locating and interviewing applicants who are qualified for the position. Our newsletter is subscribed to by thousands of blockchain, web3, and cryptocurrency engineers that want to stay up to date on the top-paying positions available.

At any given time, we only publish 75 job postings. We solely concentrate on the most lucrative and significant positions in web3. Your posting won't get buried in a crowd of entry-level jobs, unlike other job platforms. You must be on this listing if you hold a high-paying position. Following the mentioned wage, each job ad is sorted from high to low. By providing a greater minimum compensation and making it possible for more, employers can raise their standing and make their position stand out.

There are numerous methods for locating Web3 Developers. Through social networking websites, for example.

How do you narrow down the top Web3 developers?

Utilizing a set of predetermined criteria is the best approach to narrow down the field of Web3 Developer candidates from hundreds of submissions.

Defining the assignment and the job scope is the first stage. This will enable you to choose the kind of Web3 Engineer you require. A backend developer is necessary, for instance, if you require someone to create the core for your e-commerce website. On the contrary hand, you need to have a full-stack programmer or a software engineer if you're searching for an individual who can build and design an app.

Secondly, confirm if they have prior experience in your sector or field. For instance, they must have expertise in the healthcare industry if your business offers healthcare products and services.

Last but not least, inquire about the developers' portfolios, past endeavors, and educational history. Before you make a choice, you need to be aware that all of these crucial considerations.

Web3 developers have a bright future. Web3 developer jobs are in high demand, yet there aren't many of them around.

Finding someone who has a solid grasp of the frameworks and technologies they will be utilizing is crucial if you are attempting to hire a developer. This will increase their productivity at work and shorten the hiring process for you.

This article has provided you with a solution to your problem of finding a skilled web developer by outlining some of the most effective methods for finding a qualified developer. 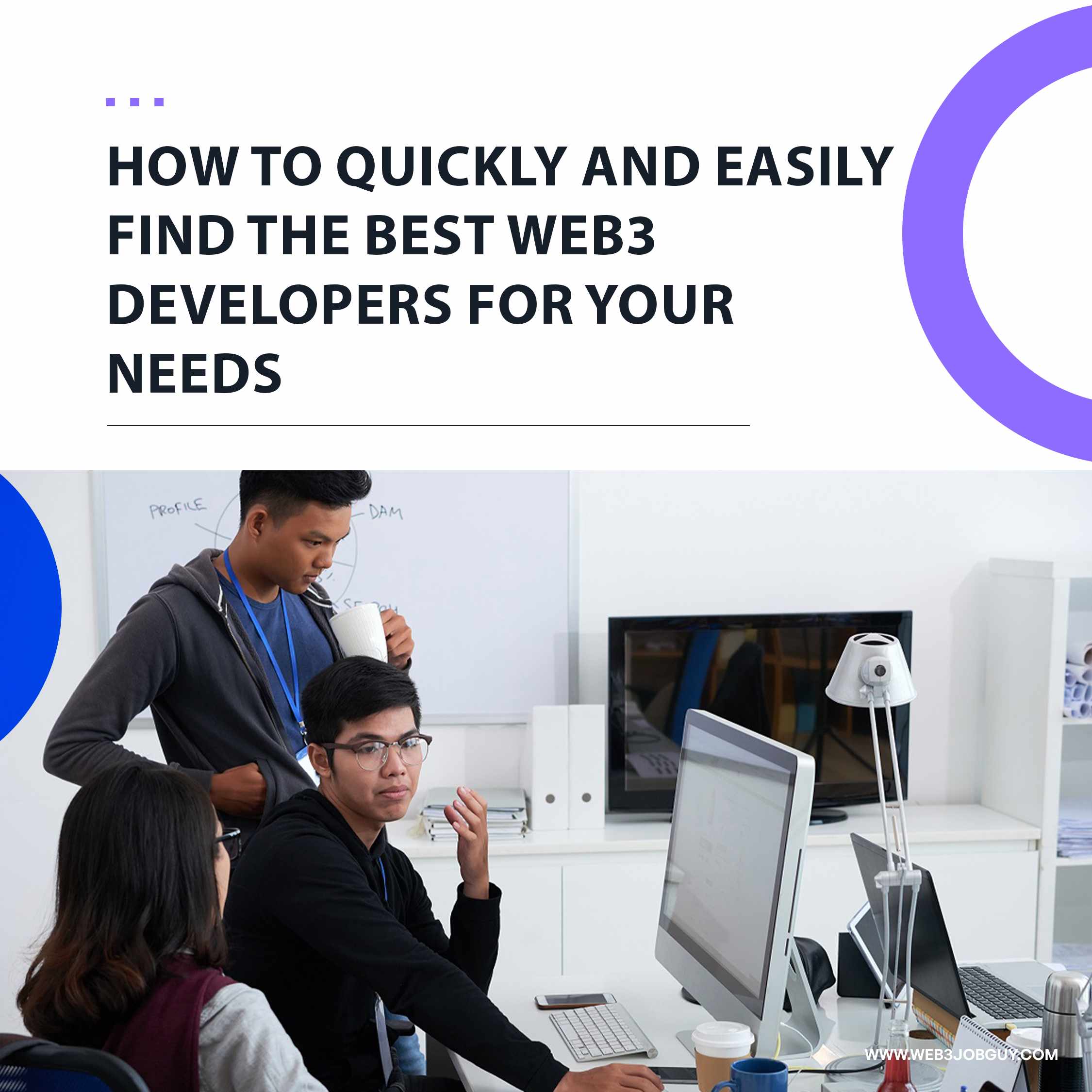 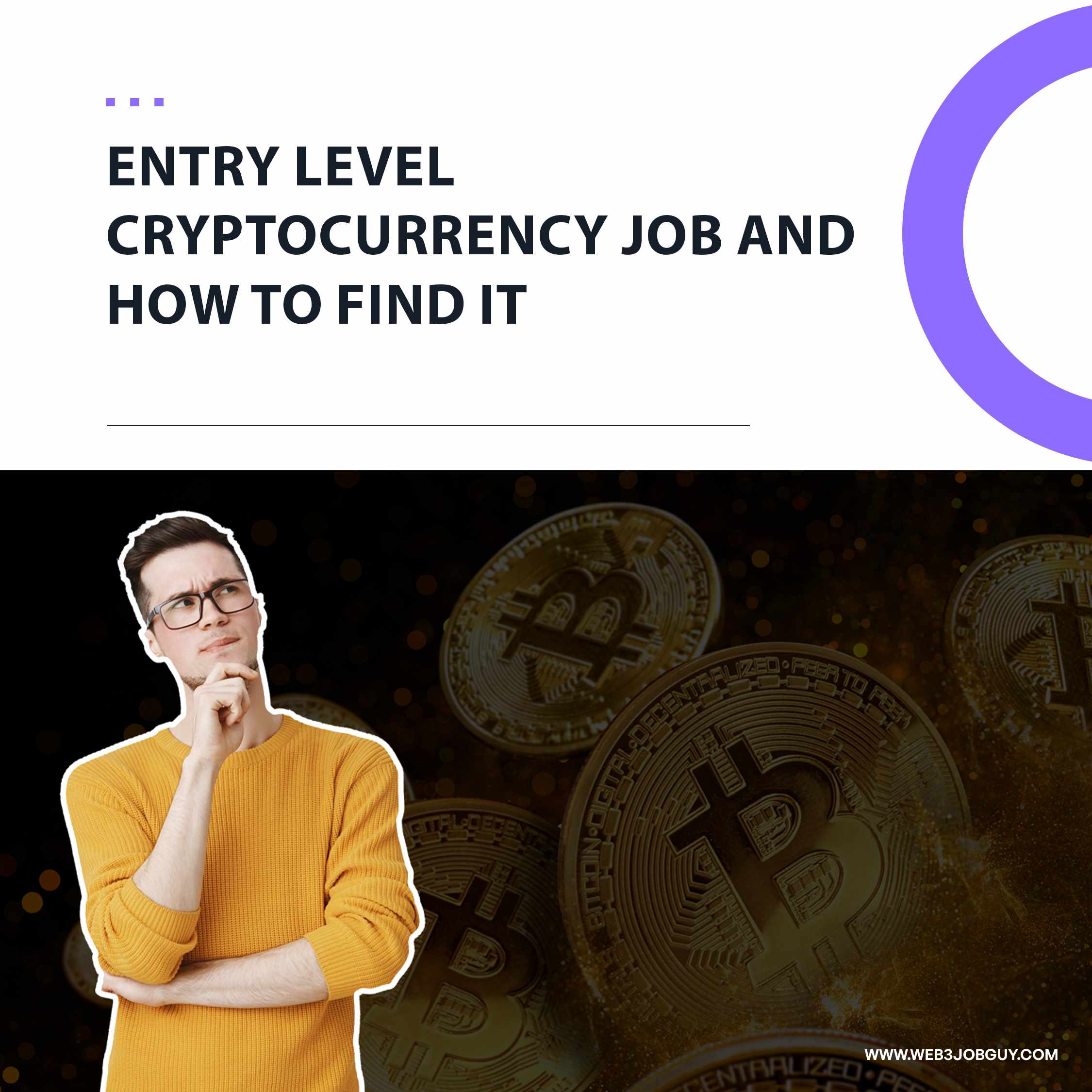 Entry level Cryptocurrency Job And how to find it 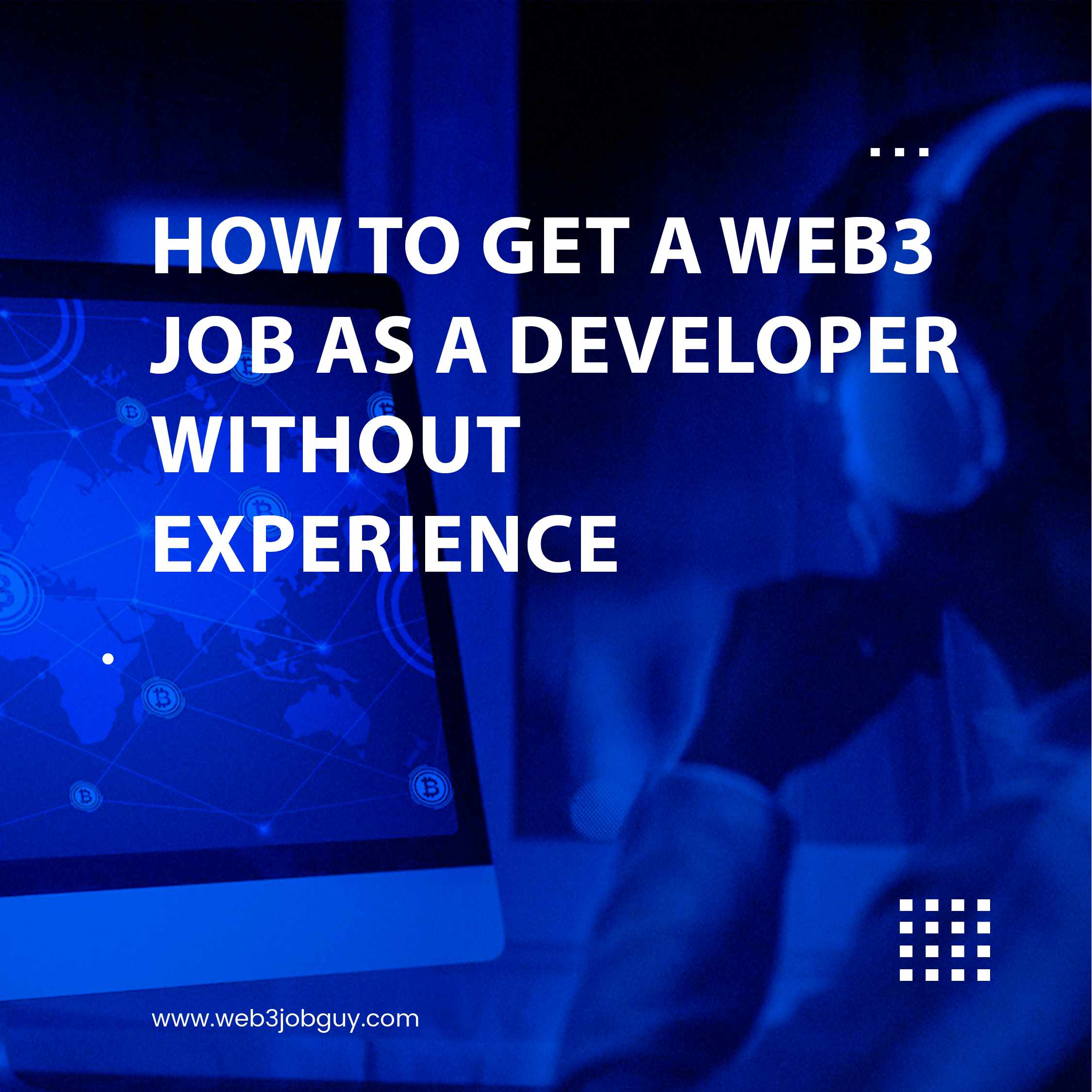 How to get a web3 job as a developer without experience